Psy2: The riddle of puzzles

Miklos Fodor developed a model based on three basic concepts (later highlighted in bold) that can describe human behavior in different fields of life e.g. problem solving, love, religion, sex, co-operation. The essence of the model is that it reinterprets the relationship of the Self and Environment, which to date has been considered as a static relationship. Thus, the model distinguishes

Self-narrowing: when the Self perceives the Environment as bigger than itself e.g. in anxiety, fear, making efforts, close attention.

Self-expanding: when the Self expands into the Environment and perceives it as a part of itself e.g. love, happiness, aha experience, orgasm.

The change of the two states can be described with a general pattern, in which the turning point is the emergence of new cognitive schemata, being mental constructions organized on different levels, representing the outside world e.g. concepts, theories, shapes, categories.

The emergence of a new cognitive schema results in a need to communicate, which prompts the Self to associate the new schema with others. The Self-expanding is complete only when such communication occurs.

A detailed description of the model and of the basic concepts, with further examples, is provided here.

One virtue of this new model is that it integrates our knowledge of human behavior yet does not contradict psychology’s main discoveries. In addition, it harmonizes with statements of world religions and common sense.

Check out the puzzle game created based on the FIPP model. 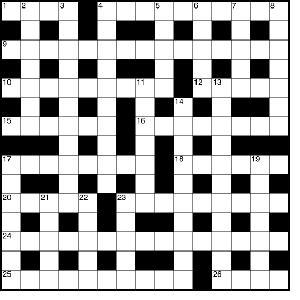 An example of a crossword puzzle.

Every day millions of people invest considerable energy in filling crosswords and solving riddles and jokes. Why do they do so? The punch-lines of the silliest jokes, and the rewards, for finding the solutions, seem laughably small compensation for the intellectual effort and time involved. Apart from the so-called “brain gym” effect, perhaps some internal reward system may be the explanation for this seemingly irrational behaviour.

According to the FIPP model, when faced with a blank crossword, our Self meets a small Environment, as the empty grid by definition provides no information and the clues are abstract until answered and placed in their context. Therefore, the state of preparing for a crossword can be characterized as an Expanded Self, similar to that when given a blank sheet of paper and allowed to do anything we want with it: we can write prose, scribble, or draw a design upon it. This can be observed in the excitement of anticipation in crossword puzzlers when receiving as a gift a puzzle book, or they buy the new issue of their favourite crossword weekly. (Such excitement is tempered, or even completely dispersed, when they notice that somebody else has partially completed the puzzle.) This phenomenon is unusual, as receiving a puzzle book means the start of many hours of work for no financial reward.

When somebody begins to fill in the puzzle by writing the first letters can hardly stop doing it. The more letters that are inserted (the greater the energy invested), so the greater the commitment shown towards completing the puzzle. As time passes, it becomes harder to continue as there are no easy tasks left, only the harder clues remain. Existing solutions define the answers to the remaining questions which is a restriction but also help in the same time. We can therefore say that the more time passes, the greater the energy invested, and so it becomes increasingly difficult to leave the puzzle partially unsolved and our investment wasted. The pool of possible solutions and the freedom to do what you know is becoming thinner and thinner. This is the process of Self Narrowing.

Extremely difficult puzzles can defeat us: in cases when we overestimate our abilities, we give up and admit to failure in a narrow state of Self. The puzzle – the Environment – seems to eat a piece out of our Self: we realize that our Self lacks the ability we believed we had, and this leads us to try to adapt our mental representation of our abilities to reality. This process results in the alteration of our Self, similar to that when we lose weight due to illness and our clothing may need to be taken in. Practically, it means that that battle with reality was won by the Environment. On the other hand extremly difficult puzzles can give us greater success so it can be worthy to risk.

As we have seen, our Self narrows during the solving of a puzzle. But what kind of object do we have in mind? Two objects may be taken into consideration, which often do not coincide:

This article, and many others, is now available in print.
The book, 'Self-expansion', contains a generalized version of FIPP not available on psy2.org

Both result in the formation of a new cognitive schema:

Now we can return to the two questions posed previously: the “brain gym” effect, and “sending the solutions in”.

As an everyday explanation, the expression “brain gym” means the “training” and stimulation of cerebral nerves in order to keep them in good condition, similarly to that of the muscular system. But what does recalling an Assyrian king’s name have to do with understanding a tax return form? That is, does recalling the lexical knowledge from time to time increase intelligence e.g. mathematical, logical? Presumably it does not, but then why did the concept of brain gym spread?

Indeed, there is truth in brain gym but, rather than making the brain do gymnastics, it means the practice of changing Narrow and Expanded states of Self. That is, it allows us to experience it without cost, that there is no need to give up on solving an intellectual problem before the deadlock, as we will be rewarded with the state of Self Expansion. The maintenance of intellectual fighting spirit obtains the additional profit of solving puzzles, instead of the seemingly inconceivable benefits of brain gymnastics. This can be seen in the interpretation of brain gym that says the brain does not become lazy, that it is ready to fight when necessary. This is supported by the observation that those people who usually solve puzzles do not face enough intellectual challenge during their work; (I have a problem in seeing mathematicians racking their brains to solve logical problems after a day of professional problem-solving, or writers completing crosswords).

To return to the relationship of Assyrian king’s name and understanding the tax return form... The common in these is the mental effort that we put in them. Independently which skills do we use it helps us maintaining the fighting spirit. The effort to create structures, the step-by-step analysis, the search for connections and keeping the whole picture in view, are common to both of them, in spite of the fact that one of them requires the application of lexical knowledge, while the other makes use of logical abilities.

5.  Why do people submit puzzle solutions?

An economist would say that they do it for an anticipated profit. Yet how can this explain puzzles that offer no material reward, only a list in the next edition naming those who sent in the correct answers? There cannot be people who can exist purely on solving puzzles.

The explanation is perhaps that the state of Self Expansion incorporates a spur, a motive, to share the solution with others. This constraint can be removed via the newspaper: the solution can be submitted office and in this way the success – the new cognitive schema – can be shared with others. Sometimes people receive feedback as well, as when they see their name in the list of those who solved the puzzle correctly. This feedback causes the Self to expand further by making the belief in the good solution stronger. So, the cognitive schema is well-rounded.

6.  Solving puzzles on a higher level

From a broader perspective, studying sciences, or explaining the Bible and theology (as a series of structural analyses) are similar to the processes described above. By way of distinction, in those matters where the solutions do not end in themselves, they may form new schemata that could be of a higher level in that they deal with the meaning of life, the world, nature &c.

Explaining the Bible is riskier, but offers more profit than does the study of a science. Small perceptions occurring during the process of study can be found in both. In explaining the Bible we need to synthesize, understand and then reconstruct huge amounts of material. Nevertheless, if we succeed, we can form schemata of the highest level: about the meaning of life, the existence of God &c. The risk is that these schemata, for some, can not be used directly in everyday life, as they relate to the relationship of the person and God; on one hand that is up to them alone, on the other it is not a means of payment. In contrast, the cognitive schemata that result from studying a science – for example, a material, or a technological procedure – are of a lower level, and can be used directly in everyday life.

Sciences (excluding philosophy) contribute greatly to everyday life with their smaller and practical results, but will never relate to the questions of the meaning of life: the invention of the n+1 type processor or the theory of relativity itself says nothing about our order in the world, and about the ways to be happy and of value.

Principal points covered in this article:

This article, and many others, is now available in print.
The book, 'Self-expansion', contains a generalized version of FIPP not available on psy2.org