We suppose that everyone has slightly different brain structure. Independently from the origin of these differences these modifications result that everyone has different abilities in various areas. Certain areas are easier to develop, certain areas are harder. The expertise leads to the ease of reaching self-expansion on certain areas, which leads to an autocatalytic mechanism because self-expansion motivates for further learning.

This autocatalytic dynamics has some interesting psychologic and economic consequences.

Miklos Fodor developed a model based on three basic concepts (later highlighted in bold) that can describe human behavior in different fields of life e.g. problem solving, love, religion, sex, co-operation. The essence of the model is that it reinterprets the relationship of the Self and Environment, which to date has been considered as a static relationship. Thus, the model distinguishes

Self-narrowing: when the Self perceives the Environment as bigger than itself e.g. in anxiety, fear, making efforts, close attention.

Self-expanding: when the Self expands into the Environment and perceives it as a part of itself e.g. love, happiness, aha experience, orgasm.

The change of the two states can be described with a general pattern, in which the turning point is the emergence of new cognitive schemata, being mental constructions organized on different levels, representing the outside world e.g. concepts, theories, shapes, categories.

The emergence of a new cognitive schema results in a need to communicate, which prompts the Self to associate the new schema with others. The Self-expanding is complete only when such communication occurs.

A detailed description of the model and of the basic concepts, with further examples, is provided here.

One virtue of this new model is that it integrates our knowledge of human behavior yet does not contradict psychology’s main discoveries. In addition, it harmonizes with statements of world religions and common sense.

Becoming familiar with the concept of cognitive schemata is not only helpful in understanding FIPP, but has other advantages as well. Using the concepts of cognitive schemata, we can obtain a better understanding of the concept of talent. In the following I will use the word brain loosely; I would apologize in advance to any neurologist who reads this. I hope that what I say properly uses the correct terms employed by those more familiar with neurology than myself.

I believe that individual brains have different deep structures. What is meant by deep structure? That the brain has a genetically coded, pre-wired neural system which enables greater receptivity of a certain science, religion, art &c. For example, those with a “chess” or “mechanical” brain, regardless of their results in other fields of life, employ the strategies, steps, beginnings and end games of chess, or the gamut of mechanical applications, from toy-cars to combustion engines, from medical hardware to wind-power generation, in dealing with everyday life. The pre-wired connections have to become active so that the building of the hierarchy of the cognitive schemata in the respective fields proceeds at a significantly faster pace than those without such talent. 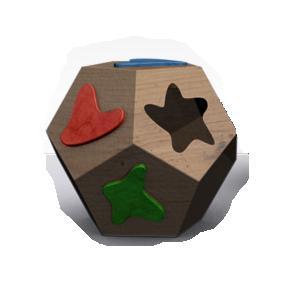 Illustration for the visual metaphor

This hypothesis is based on observing the processes involved in choosing a profession. To clarify, a visual metaphor may assist. Imagine a children’s game in which, on a plain surface, there are holes of different shapes, and separate shapes which fit these holes; the figure above shows a three-dimensional version of this game. Every shape fits only one place. Let us imagine that all of the shapes are placed on the surface randomly, and that they are then shaken over this plain surface. After a while most of the shapes find their places. However, some become stuck in an incorrect hole from which it cannot be shifted.

That is how I imagine the selection of a profession: life (school, parents, films &c.) provide us with different inputs, which equates with the shaking. Those who find their correct places do not leave it easily because it provides them with greater pleasure than any other occupation. Many people find the wrong place, but become stuck. Man feels that, when he finds his place, his abilities are best used compared with other situations, as in matching abilities with the situation so cognitive schemata are established more quickly. So many new cognitive schemata cause Self-expansion and release energy with which new cognitive schemata can be established. This illustration also applies in that, if one is originally placed far from the appropriate hole, then he has a much-decreased chance of reaching it, if at all.

3.  Easier and harder start - the role of the state

Someone born to an engineering family, but with a painter’s brain, will not so easily become an artist. The same situation applies to the gifted children of uneducated parents. The illustration also sheds light on one of the important tasks of the state: to maximize economic marginal utility (everyone doing what he can, relatively, do best). In order to assure people’s happiness in life in the long run, the state:

This should happen in tandem with consideration of the needs of the economy.

4.  National economy and the intellectual capital of a nation

Let us examine briefly the relationship of a national economy and the intellectual capital of a nation. It is optimal when supply and demand balance: the school system of a nation develops those brains that its businesses need, so it develops its economy to best use the available specialities within the country. In this context, intellectual capital refers not just to the genetic brain, but also the effects of the educational system and language, as parts of the national culture.

As every nation’s genetic composition differs from that of others, the intellect of individuals within a nation are similar to each other but differ from the intellect of other nation’s individuals. Here, a nation is a group of people, including all minorities, living in the same geographical location and speaking the same language. (If nations are diversified through minorities, there will then be a particular inner division of labor).

Parent’s views on children, the principal nurturing principles, and the basic values taught in schools, follow the identity of the national culture and school system, and develop the members of a nation in one general direction. That is why we can find national characteristics e.g. Swedes are generally viewed as creative, Germans as precise &c. This goes further: in the world economy there is a division of labor – influenced by, inter alia, natural resources, geographical location, territory, climate &c. – based on the rôle which suits it best: namely, what the collective/average intellect allows. A country with an agricultural bent may not have much heavy industry. A country that is outstandingly creative should not specialize in mass production.

This view is not black-and-white: do not be alarmed that we must immediately close all assembly lines because we are too creative! As in the optimal mixed strategy of game theory, there are weights here too, which show the value of mixing different abilities. These different abilities provide a profile of a country, and these profiles differ. The state should work on fitting the country’s intellectual profile to its economy and vice versa, the same way a person should find that job which best suits his skills and produces for him a maximum of Self-expansion. The state has to provide everybody the possibility and the chance to develop certain areas.

5.  Feed-back circles in the choice of profession

The structure of unique brains, or brains with certain talents, helps in choosing a life course and profession which best utilizes their comparative advantages. This assistance (the brain itself chooses a suitable profession) occurs when someone commences an occupation in which his talent can be used. Two indicators show that he is on a suitable track:

To fulfil the latter condition, two additional factors are required:

The phenomenon of certain abilities coinciding with other abilities supports my view of extant unique brains. Further evidence is provided by skills being built up by units – we could call them sub-skills – that are nameless as they are smaller than those previously recognized or described in psychology. A fair illustration of these sub-skills arises with athletes, whose speed is explained by nerves that conduct stimuli more quickly, and musculature with unique or more intense features. In summary, we know that some athletes are quicker, but being quick requires those different sub-skills described above. The brain can also have structural differences based on the existence and combination of these sub-skills; for example, different connections of the neurons, or areas of the brain that are overdeveloped.

These structural differences are easily recognized by people who know what to look for: the best examples being teachers and career advisors who observe those indications that inform them of a person’s brain structure. By way of illustration, the layman would have to consider whether a house in the Alps is built of brick or wood. To an architect, the answer is obvious as he sees not only the surface but also the structure within. Teachers reach their conclusions from the speed of learning – the speed of establishment of cognitive schemata – while career advisors listen to the structure of communication. Examples of the latter include:

Choosing a profession is based on the experience coming from childhood and school on identifying those areas where the creation of new cognitive schemata happens on high speed plus requires less investment and gives more profit due to the pre-wired brain, respectively the environment’s confirmatory feedback (considering that the profession in discussion fits the aims of the environment). The fast pace of creation of the schemata and the extra-profit coming from dealing with the preferred area predict future success in a the profession linked to this area.

Principal points covered in this article: